Byron Court was opened on 3rd November 1932 and has been supporting the learning of primary aged pupils ever since.

We hope you enjoy our old photos and documents and messages from ex-students - some from the other side of the globe!

The programme for the opening ceremony (1932)

Ex-student Mr Peter Rudge has kindly shared his form photo at Byron Court. In it is his class teacher Miss McWilliams and the Headteacher.

Ex-student Robert Chapman was kind enough to share with us his school report from 1945!

I attended Byron Court School from 1946 to 1951 and am delighted to see that the school is still around and doing so well after all those years.. The picture of the front entrance on this site brought back so many memories of those days. How many times I had walked from Paxford Road down that pathway to the school! I remember the playground and my classroom so well. Thank you Byron Court for giving me my start in life...

I attended Byron Court School from 1946 till 1949. I loved the school and wanted so much to learn. My teacher was Miss McWilliams and I believe she later left and went to Lyon Park Avenue School. I used to live in a prefab in Vaughn Terrace, off East Lane and used to walk to school every day! I would love to get in touch with any of my class mates even though I am sure I will not remember them. It is wonderful to see the school doing so well after all this time.

Thank you to Mrs Beryl Willis for sending us these two school photos from 1954.

'I am the fourth from the right on the back row in a pinnafore dress and ribbon in my hair. Photo 2 is taken in the same year and is of my older brother Peter's class, he is on the front row, 1st on the right with what looks like grubby knees and socks at half mast (which they always were!)

I have happy memories of Byron Court, another era!'

A most interesting site, which brings back many happy memories. I attended Byron Court between 1950 and 1956. The Head was Mr. Read and all my generation remember the magnificent Miss Leversuch.

This my grade 3 photograph, probably 1954 or 1955. I think the teacher is Miss Kaufman. I am in the middle of the second row, 5th girl in, dark hair wearing a horizontal striped dress. I must have started school in 1952 and left almost at the end of grade 7, in 1956 when we moved to Vancouver Canada. My favourite teacher was my grade 6 teacher, Mr Potter. He made learning fun, and on Friday afternoons we had a stamp club in his classroom.  My worst teacher was Miss Pain, who lived up to her name as she had a habit of hitting her students on our backs. I was hit several times, usually because I was talking. She was the only bad teacher though…the rest were lovely. 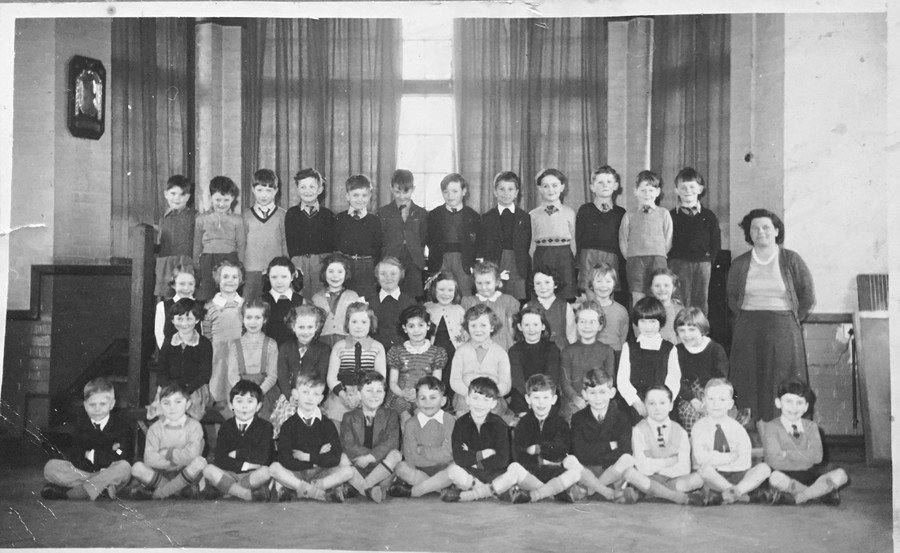 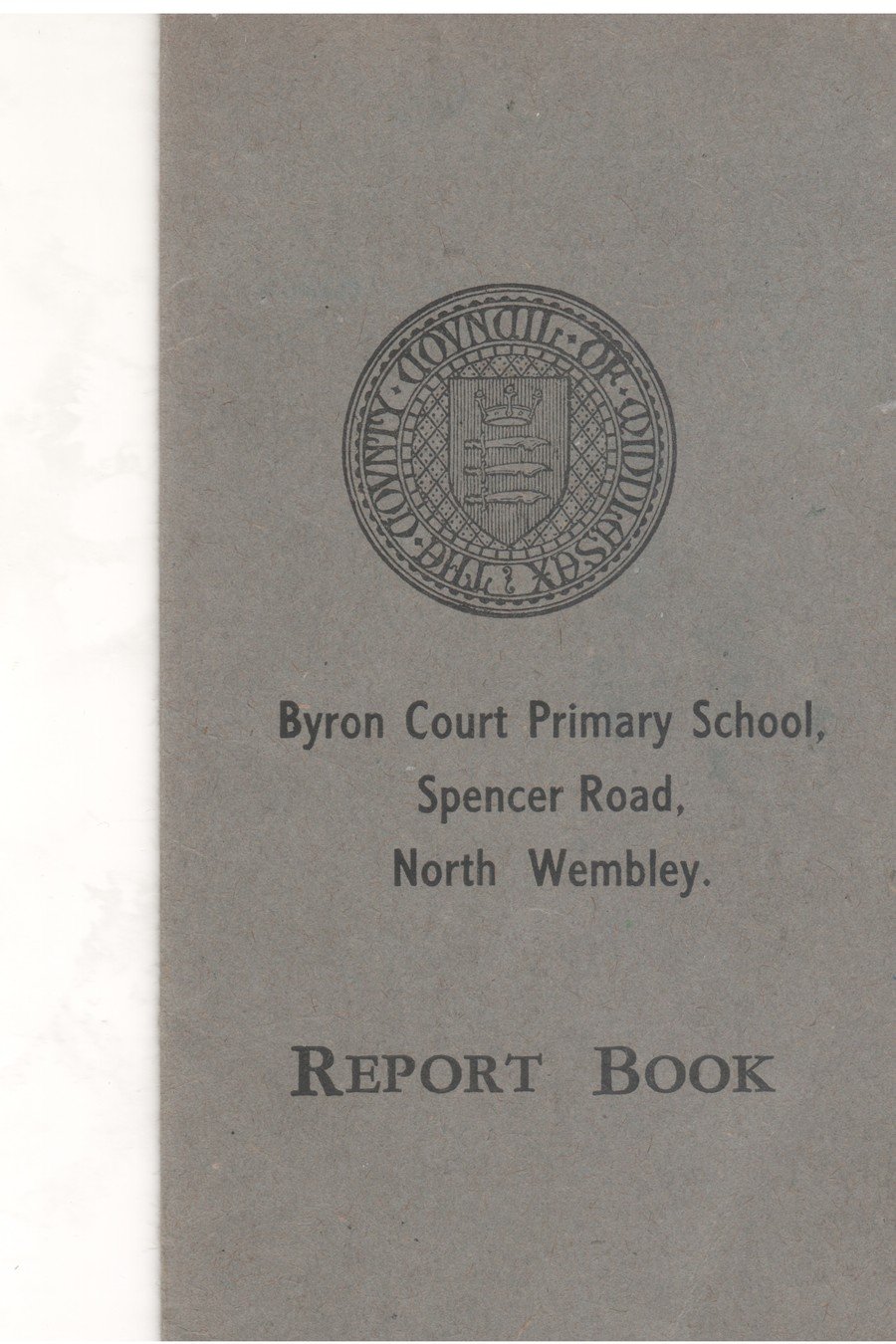 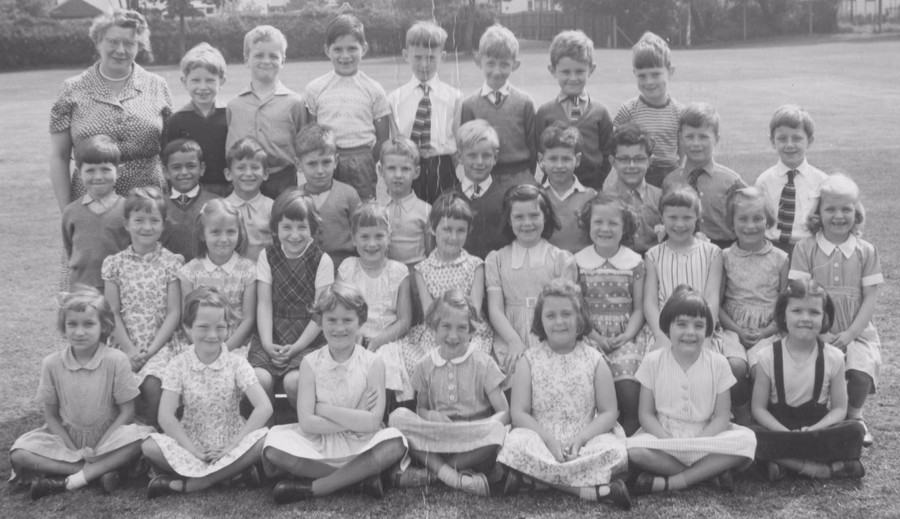 Hi - I was a pupil from 1963 to 1966 - I have discovered a staff photo from circa 1965 plus some class photos from that time. I have very few memories of Byron Court School. I attended from 1963 until I left in October 1966 when the family moved to Manchester. My main memory is of the swimming pool, which seemed to be the coldest in the world. Mr Ginn was the Headmaster who lived in Carlton Avenue West. We knew that if we saw him walking past our house on the Fairway we were either going to be just on time or late for school. I have no bad memories of Byron Court, which hopefully means I enjoyed it there. I have had a fairly successful life, which I would like to think that the early years at the school provided a solid base.

Hi kids i am a past pupil, some 40years ago now. i chanced across a picture of your beautiful school and i had to visit and leave a message. work hard and you will find you have wonderful memories of the school as do i.wish best wishes to all pupils and staff.

I have just come across your web site. I was a pupil at Byron Court Primary School from 1968-1973 and have nothing but fond memories. The school had a swimming pool of its own in those days. Mr Ginn was Headmaster and my favourite teacher was Miss Townsend, who regaled us with stories of her time spent in Singapore! I went on to work at the House of Commons, had two children and now work as a Teaching Assistant at at small village school in Devon, where I have lived for the last ten years. It is lovely to see that my old school has continued to flourish over the last 40 years, and I wish you all continued success. As a school, you definitely set myself and my sister on the right path!

It is lovely to see the School being cared for and modernised. I went to Byron Court School through the 1970s and so did all my brothers and sisters (6 of us in total). To be able to go to the same school from 4 years upto 11 years was fantastic - I truely love Byron Court School and have many happy memories. Thank you for looking after it and the next generation of children to enjoy its wonder Teresa :)

I went to the elementary school from 1977 to 1973 and my teacher was Evelyn Stokeley and the head teacher was Kenneth kane, I love and enjoy very much those years... thanks very much

I used to come to this school about 30yrs ago and i'm utterly suprised at how much the school has changed, I almost got lost coming into the school

I Love Byron Court.All The Teachers Of Byron Court Were Really Nice But My Best Teachers were Miss K Pritcard,Mr O'Sullivon And Mr Walch ,There Method Of Teaching Were Very Very Good.I Miss My Teachers.Now I Am In Pakistan But I Have Lots Of Good Memories Of Byron Court.Thanks You Byron Court Ahsan R Mubashir(PK)

We use necessary cookies to make our site work. We'd also like to set optional analytics cookies to help us improve it. We won't set optional cookies unless you enable them. Using this tool will set a cookie on your device to remember your preferences.

Necessary cookies enable core functionality such as security, network management, and accessibility. You may disable these by changing your browser settings, but this may affect how the website functions.